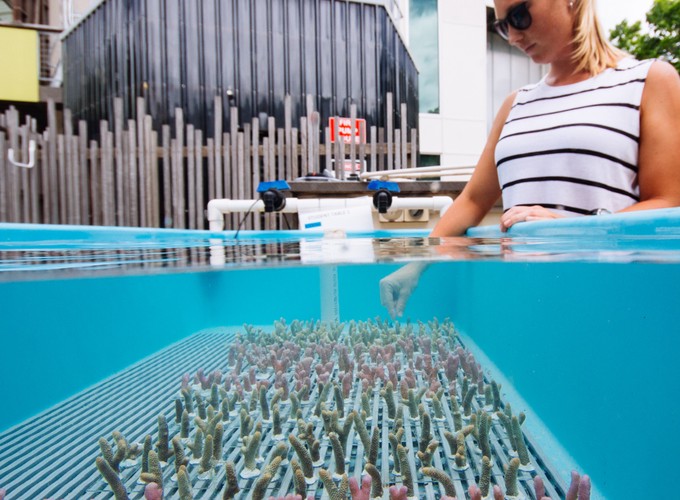 Background. Climate change causes the breakdown of the symbiotic relationships between reef-building corals and their photosynthetic symbionts (genus Symbiodinium), with thermal anomalies in 2015–2016 triggering the most widespread mass coral bleaching on record and unprecedented mortality on the Great Barrier Reef. Targeted studies using specific coral stress indicators have highlighted the complexity of the physiological processes occurring during thermal stress, but have been unable to provide a clear mechanistic understanding of coral bleaching. Results. Here, we present an extensive multi-trait-based study in which we compare the thermal stress responses of two phylogenetically distinct and widely distributed coral species, Acropora millepora and Stylophora pistillata, integrating 14 individual stress indicators over time across a simulated thermal anomaly. We found that key stress responses were conserved across both taxa, with the loss of symbionts and the activation of antioxidant mechanisms occurring well before collapse of the physiological parameters, including gross oxygen production and chlorophyll a. Our study also revealed species-specific traits, including differences in the timing of antioxidant regulation, as well as drastic differences in the production of the sulfur compound dimethylsulfoniopropionate during bleaching. Indeed, the concentration of this antioxidant increased two-fold in A. millepora after the corals started to bleach, while it decreased 70% in S. pistillata. Conclusions. We identify a well-defined cascading response to thermal stress, demarking clear pathophysiological reactions conserved across the two species, which might be central to fully understanding the mechanisms triggering thermally induced coral bleaching. These results highlight that bleaching is a conserved mechanism, but specific adaptations linked to the coral’s antioxidant capacity drive differences in the sensitivity and thus tolerance of each coral species to thermal stress.